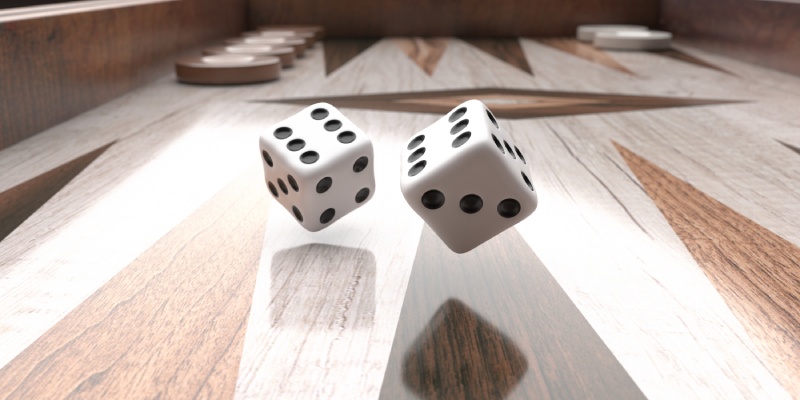 Dating as far back as 1300 BC, Backgammon is one of the oldest games in history. We like to think we add a bit of a modern spin to the game since you can customize your backgammon set with us! Backgammon isn’t always a game for newbies but it IS fun, and requires both luck and skill to win.

Anyone can be beat in a game of Backgammon. We’re here to help you succeed with some simple steps on how to play backgammon for beginners.

Backgammon Rules for Beginners: The Set-Up

Backgammon is a two-player game, and each player has their own colored set of fifteen checkers. Both players also need two dice, a dice cup, and a doubling cube that has the numbers 2, 4, 8, 16, 32, and 64.

Before we dive into backgammon rules for beginners, let’s talk basics.

The Board: First, it is important to understand how the backgammon board is set up.

The players move their checkers in opposite directions. So, if your opponent moves from point 1 to 24, you will move from point 24 to 1.

The Goal: The winner of a game of Backgammon must be the first to move all 15 checkers to their home board and bear off (aka remove the checkers from the board – more on that below).

Starting a Game: The rules state that to start a backgammon game, both players must roll a single die, and the player with the highest number moves first. Then, each player will roll two dice before making their move.

A tip for beginners playing backgammon is to always ensure the two dice land flat and on the right side of the Backgammon board. If it lands anywhere else, the player must roll again.

So how do you play backgammon? Let’s talk jargon and making winning moves:

The Basics of Play

The numbers on the dice determine how many points the player can move their checker. A player can only move to a point that is not occupied by two or more of the opponent’s checkers.

The player can decide to move one checker or split the moves between two checkers. If a player rolls a double, the numbers are played twice. For instance, rolling two sixes means the player can move six spaces, four times.

Backgammon rules state that if a player has one or more checkers on the bar, they must re-enter them on the opponent’s home board. This is done by rolling two dice and moving your checker to the corresponding point of one of the numbers. But if the point is not open, the player cannot move and loses their turn. A player can’t make any other moves until there are no checkers on the bar.

Once all of a player’s checkers are in their home board, they can start the process of bearing off, meaning you can begin to remove your pieces from the board. A player can remove their checker by rolling a number that matches a point with a checker on it. If the player is unable to bear off, they must move a checker from a higher point.

A backgammon tip for beginners is to use the doubling cube whenever possible. The doubling cube is used when a player feels they have an advantage over their opponent and when they want to offer a double before rolling. The opposing player either accepts or rejects the offer. If the opponent accepts the offer, the value of the game doubles, and they take ownership of the cube.

No one wants to be gammoned or backgammed. And we mean, no one.

Here’s how it works. If a player bears off all fifteen checkers and the opponent was able to bear off at least one checker, that person wins.

If the losing player wasn’t able to bear off any checkers, they are gammoned and lose two games.

If the losing player didn’t bear off any pieces and has a chip on the middle bar, they are backgammoned and lose three games.

You now know the basics of backgammon rules for beginners! You can enjoy this fun board game with your friends and family on your very own customized backgammon board to boot.

Where to Buy Backgammon